The music of Said Mesnaoui

First and foremost, in his music, Saïd Mesnaoui is looking out onto the world. He wants to cast bridges between musicians whether from Canada, France or anywhere else in the world, and also between various musical styles. As an artist, he acts like a messenger for peace, joy and hope : music is then a means to share and exchange cultures .

Through his varied musical Canadian productions, Saïd has explored different styles: traditional at first , then fusion , and later on, a return to his roots with his jazz-trance record “La Montagne” performed with Quebec musicians. In his new compositions Saïd marries Gnawa trance , tempo rock, reggae pulsations, and African blues.

The sound effects consist in a melody played by such instruments as saxophone, violin, flute, lute, guitar, bass that can produce either oriental or occidental sounds. With percussions (tablas, derbouka, bendir, qräqeb) he gets the hypnotic trance-rhythm able thus to create joy and energy.

Playing his Hajhouj (guembri)-a traditional melodious low-sound bass -Saïd Mesnaoui expresses music with true strength and passion. Saïd endeavours to keep in harmony with the Quebec and French musicians who can tame his music so well. He has worked out his new compositions from a global point of view. He intends his new album “Fik-Anta (Wake up)”, to sound as an entity in order to transport the audience throughout into a rhythmical world of magic. 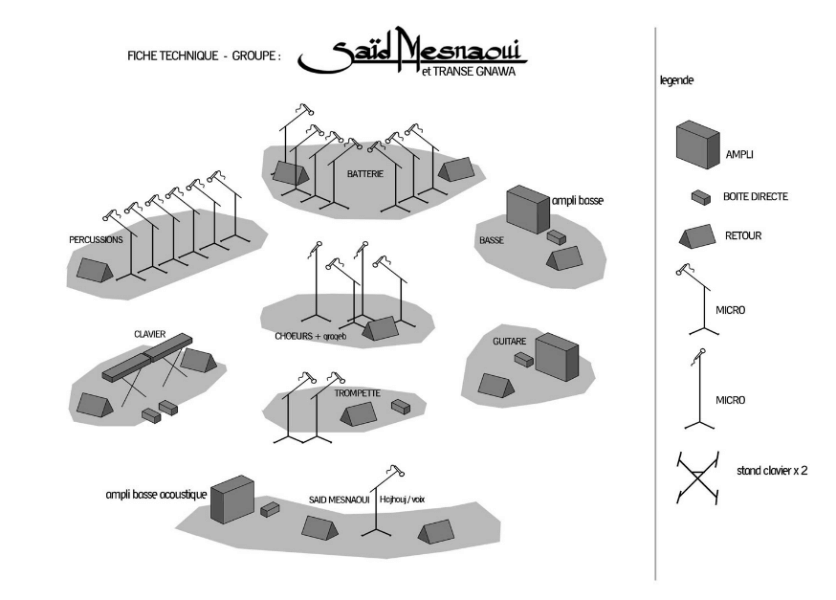 Gnawas are the descendants of the black slaves who arrived in Morocco between the XVth and the XVIIIth centuries, transported from Western sub-Saharan African States such as Mauritania, Guinea, Mali, Senegal, or Niger. They keep up their faith in their Saint Patron Sidna Bilal, a black slave --enfranchised by Mahomet and one of his first adepts-- whose music is said to have cured Fatima, Mahomet's daughter,

Their songs tell about life in the old days, slavery, deceased masters, whispering winds or babbling rivers. They Never mention Love.Gnawas' music-- fundamentally different from the Arabic-Andalusian style-- has got a therapeutic virtue related to rituals of possession. Very much like Vodoo ceremonies in Haiti, it refers to African traditions mingled with Arabian sounds.

In northern America, slaves' songs generated blues, negro spirituals and jazz. In the Caribbean islands, they produced Vodoo and santeria.. In Brazil, macumba and candomblé. In Morocco, they led to Gnawi music.

Gnawas are mainly known as folklore traditional musicians. In their music, rhythm, mysticism and trance get entertwined in a frenetic, encensed atmosphere. It is a type of music leading to catharsis.
Gnawas practise a rite of possession called « derdeba »which takes place at night « lila » The ceremony is generally organized by a lady, « the talâa». This word meaning elevation is used here because the « talaa » is first and foremost the one who can call up her matching melk at will when she practises at home. She makes it appear through fumigations. The Gnawa musicians play the patterns of those spirits called « m'louk »( plural of « melk »). They call them up and ask them to appear so as to fight devils and illnesses .
When processing the ritual of possession « lila de derdeba», the Gnawas mainly use an intrument called hajhouj (or guembri, a bass three-stringed percussion lute. It is made of a sound-box and a wooden neck (This wood can be walnut, mahogany or fig-tree).
This instrument is played by the master of music (maâlem) who is also the singer in the band. The other musicians play the qrâqeb ( something like metal castanets) and T'Bel ( large drums ). They also perform the countermelody in a chorus when repeating the patterns sung by the master.
Their ritual specifically defined is composed of several stages each with a precise meaning . Generally, the « lila » lasts overnight from sunset to sunrise.

Such music merged in the Sacred allows people to enjoy the richness of their origins. Everything in Gnawa music is meaningful, tinted with a deep sense of education twinned with esthetics and generating elation .
Like with fine arts, the finality of music goes beyond sensuality, music is source of knowledge and its true function is to reveal each being to oneself thus feeling in full harmony with the universe.

Said Mesnaoui draws inspiration from the same sources of tradition, while respecting it. While maintaining strong ties with precious Moroccan heritage, he tries to overtake. This fascinating rhythm blends with different beats and influences. In this movement, he looks at the world and seeks to open new horizons to share and understand his message of Peace and Hope to all cultures.